2 mins ·
I always wish I was in San Jose, Calif. on Memorial Day. That's where our beautiful daughter Carolyn Brownell Coney is buried. Yet I rejoice. Jesus said, "Who ever lives and believes in me will never die." (John 11:26). She's been with Jesus since she was 31, and when the trumpet sounds and Jesus returns, she will be united with her body-- changed--in a moment in a twinkling of an eye. And we who are alive and remain will be caught up together with her and others coming from the graves and meeting Jesus in the air! What a day that will be! (See 1 Thessalonians 4:16-18).

Posted by Ada Brownell, author at 3:02 PM No comments:

A RETIRED MEDICAL REPORTER ASKS: WHAT WILL YOU BRING INTO YOUR MARRIAGE?


WILL YOU BRING A SEXUALLY TRANSMITTED DISEASE?

An excerpt from the book, IMAGINE THE FUTURE YOU


“Be sober, be vigilant; because your adversary the devil, as a roaring lion, walks about, seeking whom he may devour” 1 Peter 5:8.


A high school human sexuality teacher who is a Christian did this experiment for me in a class I taught at our church’s Dunamis Academy.


She gave paper and pencils to everyone. Before class, she marked an X on the back of one of the papers, but none of the kids knew it. She instructed students to shake hands with other teens and have them sign each other’s papers. They shook hands and gathered signatures for five minutes, and then returned to their seats.


“Turn your papers over and see if there is an X on the back,” she told them. A girl found the X and raised her hand.


The teacher told her to stand up. “She has Virus X. Who signed her paper?”


Five hands went up, and those kids stood.


“Now these five have the virus. Who signed their papers?” Four more got out of their seats, also contaminated by the fictional “virus.”


Eventually all remaining students were “infected.”


“This is how sexually transmitted diseases spread,” the teacher said. “When you have sex with someone, you are essentially going to bed with every person that individual had sex with, because once a sexually transmitted disease is shared, it is contagious until the disease is cured—if the disease has a cure. You might be intimate with only one person but be exposed to multiple diseases.”


Some STDs, such as herpes, cause severe misery and are incurable, but they don’t kill. But the HIV-AIDS virus isn’t the only one that kills. Both hepatitis B and C affect the liver and can take your life. Human papilloma virus (genital warts) sometimes causes cervical cancer. Chlamydia and gonorrhea, left untreated, can affect joints and heart valves and cause pelvic inflammatory disease, infertility, and even blindness.


A story by Lawrence K. Altman published in the New York Times on March 12, 2008, said the first national study of four common sexually transmitted diseases among girls and young women found that one in four is infected with at least one of the diseases.


But the federal study could have pointed out three out of four do not have the disease. I imagine a large number of them were virgins.


When my husband and I were married, couples took blood tests to check for STDs. When a virgin discovered she was set to marry someone affected with a disease, there was time to call off the wedding. Of course, my husband and I had nothing to worry about, and the test came out negative.


I would guess in my day most of us were virgins, and I knew my beautiful white satin gown testified to that fact.


According to Kelsey McIntyre in From Times Past, white has been accepted as the preferred wedding dress color since Queen Victoria married her cousin Albert of Saxe-Coburg in 1840. Godey’s Lady’s Book in 1849 reported, “Custom has decided, from the earliest ages, that white is the most fitting hue, whatever may be the material. It is an emblem of the purity and innocence of girlhood and the unsullied heart she now submits to the chosen one.”


A wedding gown probably is the most beautiful dress most women wear in their lives. Even the least expensive are exquisite.


Young men, too, probably will never be more handsome than the day they stand at the altar waiting in a tuxedo for the beautiful bride.


Children often like to play “bride and bridegroom,” and during their growing years, many girls dream of the day when they walk down the church aisle, dressed in white, as the wedding march fills the sanctuary.


Something happened. A large number of young men don’t bend a knee and extend a tiny box containing a diamond and ask their beloved to marry them. Instead, many just want to rush the girls off to bed somewhere and perhaps live together.


Some folks blame the lack of finances and needing to wait to earn a college education as the reason to delay marriage, but it doesn’t make sense. You can get a marriage license for a few bucks. A pastor will marry you for free, but it’s customary to pay him one hundred dollars or so. A couple can live cheaper than two single people, and you can get your education after marriage. I did. Thousands of people earn their degrees later, and most of the people did from generations before us.


But there is something else—and it’s huge. Young women and men are giving away their virginity as if they are dropping a penny on the sidewalk and leaving it there. Guys who already have a sexual relationship with a woman won’t hurry to get married. A woman who gives away her virginity before marriage risks never being married—especially to him!

Ada Brownell has been writing for Christian publications since age 15 and spent much of her life as a daily newspaper reporter. She has a B.S. degree in Mass Communications and worked most of her career at The Pueblo Chieftain in Colo., where she spent the last seven years as a medical writer. After moving to Springfield, MO in her retirement, she continues to free lance for Christian publications and write non-fiction and fiction books.

She has been married to her husband, Lester, for 64 years.

IMAGINE THE FUTURE YOU
A motivational Bible study by Ada Brownell
Ready or not, you’re going into your future.
If you continue to do what you do now, what kind of future will you have? This Bible study will help you discover evidence for faith in God; how to look and be your best; who can help; interesting information about dating, love and marriage; choosing a career; how to deposit good things into your brain you can spend; and how to avoid hazards that jeopardize a successful life on earth and for eternity, all mingled with true stories that can make you smile.
Review:  How I would have loved to sit at Mrs. Brownell's knee when I was a teen. This wholesome book resounds with sage, Godly advice and could be picked up again and again as needs arise. Worthwhile for parents too. Much fodder for family discussion.
Also available in Audio. Read or listen to first chapter free! #Teens #Family #Devotions
Links: http://www.amazon.com/dp/1489558284    http://www.amazon.com/-/e/B001KJ2C06
ITunes  http://ow.ly/TY6uO

Posted by Ada Brownell, author at 3:23 PM No comments:

Last week during the free days arranged by Elk Lake Publishing Inc. on Amazon, readers picked up 1,445 copies of The Lady Fugitive, the first book in my Peaches and Dreams series.

Readers are interested in the sequel, Peach Blossom Rancher, which isn't free but it's worth every cent of the $3.95 cost.

Often other authors ask where I did my research on that book. The Lady Fugitive is based on my maternal grandparents on things I heard they did and experienced, but it's not  a true historical. I knew about some major points in their lives, but when information is handed down from 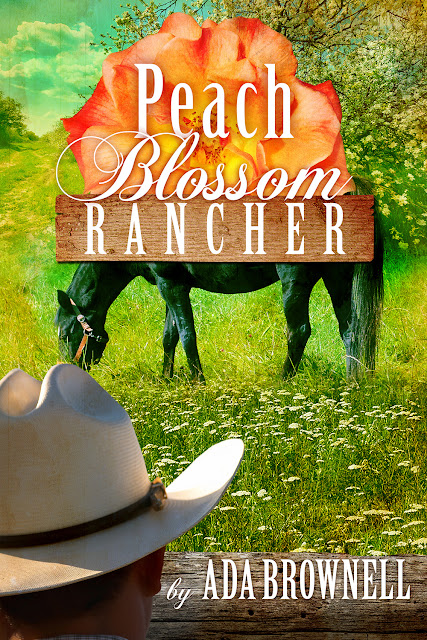 generation to generation not everybody agrees about what happened, and what is or isn't true. Plus author often take license and invent things they know aren't true.

In contrast, the sub-plot of Peach Blossom Rancher grew out of my experience covering the Colorado Mental Health Institute at Pueblo, a former asylum, on my beat as a reporter for The Pueblo Chieftain.

Yet it's still fiction. The characters never lived. Yet some of the factual information about how people were diagnosed as being imbeciles in the early 1900s, where the story is set, comes from data supplied to me by that mental hospital.

The main plot occurs on a peach/horse ranch, with which I am familiar because I worked in that setting in my teens and I worked in a packing shed. Yet research came in on how to bring a neglected orchard back to its former glory. I needed more information on horses, too.

Mental illness comes in when the woman the rancher hopes to marry decides to help one of her father's law associates take an asylum to court because of misdiagnoses.

But then, as with all plots, complications happen. John Lincoln Parks, the rancher, stumbles over a body in his barn and he's jailed for murder, a neighbor rancher thinks she's in love with John, the woman John wants to marry decides to go back to practicing law. Throw in a big sow and a bunch of little pigs, overcrowded rabbit hutches, a kid who is a bundle of laughs, and two wonderful black servants who inspire, love, and encourage John and the whole family.

Will John be able to restore the ranch? Will those wrongfully diagnosed as insane be released? Will he find a wife?

Posted by Ada Brownell, author at 3:08 PM No comments: