Nicole Deese is a mentor to women who struggle with the burden of guilt and shame. She works closely with several ministries at her church and loves to share the message of recovery with those who are hurting. She is also the author of the Letting Go series, a mother of two rambunctious boys, and a wife of ten years to her hunk-of-a-husband, Tim. Her family resides in Frisco, Texas.

HOW GOD GAVE ME VICTORY OVER ANXIETY
By Nicole Deese


I have struggled with anxiety for years.

When I wrote and published my first novel, All for Anna, that ugly stronghold was at an all-time high. I remember days I felt so physically ill that I would skip meals in order to alleviate the constant knot inside my core. Just the mere mention of the word “publishing” would cause me to break out into a full body sweat.

It didn’t matter how many good reviews I received, or how many affirmations came my way, I couldn’t shake the unrelenting pull of fear.
It was during that season though that I felt God’s calming peace more than ever before. There was only one reason for this: I had NO control. I was truly powerless. I had nothing to hold onto that was solid or certain, except for my faith in God.
There were several passages of scripture I clung to and read every morning during that time. They still serve as a reminder of God’s amazing faithfulness to me today.

Here are two of my favorites:


Isaiah 12:2
“See, God has come to save me.
I will trust in Him and not be afraid.
The Lord God is my strength and my song;
He has given me victory.”


Ephesians 3:20
“Now to Him who is able to do immeasurably more than all we ask or imagine, according to his power that is at work within us…”


Though I still struggle with anxiety, I am no longer a slave to it. When I start to feel that all-too-familiar clench in my gut, I remember this: He has already given me victory.
I just need to take hold of it. Daily. 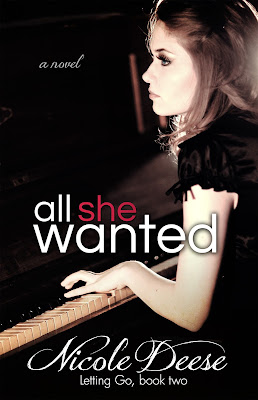 Synopsis for All for Anna:

If guilt is a prison; Victoria Sales has given herself a life sentence.
Held captive by regret, 23 year-old trauma RN, Tori Sales, has seen the reality of many nightmares. But there is one nightmare she will never wake from—her last memory of Anna.
Her efforts to save the little girl were not enough. She was not enough.
After a year of living alone, Tori is forced to return home—a place where heartache, loss, and broken relationships lurk around every corner. Isolation is her only solace; running is her only escape.
But she cannot outrun the truth forever.
When a handsome, compassionate stranger enters her world, Tori is inspired to deal with her past and focus on the future—one she never believed possible. But before her quest for closure is complete, a new revelation surfaces, tainting her world yet again.
Will she accept the recovery she so desperately needs? Or will she choose the escape she knows best...

Posted by Ada Brownell, author at 2:00 AM