Matt Maher has inspired my writing over the last couple of years and he doesn’t even know it! I don’t pretend to understand it completely, but at important moments on my writing journey his songs have either popped into my head or started playing on my iPod or iTunes.

Well, maybe I do understand. It’s not Matt Maher precisely, but rather it’s that Maher has asked God to speak to people through his music, and God has answered that prayer.

For example: At a time when I had been dwelling in a novel writing desert for literally seven years—my fellow writers know what I mean by this—I got the call from my agent telling me Tyndale House wanted to publish my Ellis Island Series. The next morning I went for a walk and Matt Maher’s song  ALIVE AGAIN started playing. Here are some of the words: 'Cause I can see the light before I see the sunrise

I realized that God was now shouting at me (in a big way) that He has not abandoned me in that writing desert after all. I truly felt like I had moved from darkness into light, and this song spoke that to me. God doesn’t keep us from walking through dark valleys, but He does get us through them.

There have been other times as well, like just this morning. I was struggling with some personal issues—something that incidentally has caused me to struggle through writing my contacted books—and this Matt Maher song popped into my head. I went straight to YouTube to listen. You might want to as well!

Lord, I come, I confess
Bowing here I find my rest
Without You I fall apart
You're the One that guides my heart

What keeps resounding over and over in my mind is “My one defense.” Life throws so much at me sometimes—at us all—that it’s easy to forget that we have “one defense” and it’s all we need to protect our hearts. And a writer is wordless without her heart.

So I thank Matt Maher. I thank him for his giving spirit and his willingness to put the message God gives him into his gifted art form for his listeners. And I pray that I will do the same.

I will bless the Lord who guides me;  even at night my heart instructs me.~Psalm 16:7 NLT


Blurb:
The year is 1901, the literary sensation The Wonderful Wizard of Oz is taking New York City by storm, and 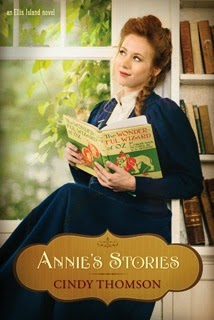 everyone wonders where the next great book will come from. But to Annie Gallagher, stories are more than entertainment—they’re a sweet reminder of her storyteller father. After his death, Annie fled Ireland for the land of dreams, finding work at Hawkins House.
But when a fellow boarder with something to hide is accused of misconduct and authorities threaten to shut down the boardinghouse, Annie fears she may lose her new friends, her housekeeping job . . . and her means of funding her dream: a memorial library to honor her father. Furthermore, the friendly postman shows a little too much interest in Annie—and in her father’s unpublished stories. In fact, he suspects these tales may hold a grand secret.
Though the postman’s intentions seem pure, Annie wants to share her father’s stories on her own terms. Determined to prove herself, Annie must forge her own path to aid her friend and create the future she’s always envisioned . . . where dreams really do come true.


Cindy Thomson is a writer and an avid genealogy enthusiast. Her love of history and her Scots-Irish heritage have inspired much of her writing, including her new Ellis Island series. Cindy is also the author of Brigid of Ireland and Celtic Wisdom: Treasures from Ireland. She combined her love of history and baseball to co-author the biography Three Finger: The Mordecai Brown Story, which was a finalist for the Society for American Baseball Research's Larry Ritter Book Award. In addition to books, Cindy has written on a regular basis for numerous online and print publications and is a mentor for the Jerry B. Jenkins Christian Writers Guild. She is also a member of American Christian Fiction Writers and the Historical Novel Society. Cindy and her husband have three grown sons and live in central Ohio. Visit her online at www.cindyswriting.com.
Posted by Ada Brownell, author at 1:00 AM